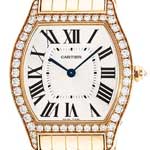 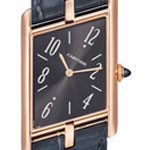 Louis-François Cartier founded Cartier in 1847. The company to which he lends his name was originally a Parisian jewelry boutique. The third generation of the Cartier family grew the business considerably in the early twentieth century. In 1904, Louis Cartier designed the first Cartier wristwatch at the request of the Brazilian aviator Alberto Santos-Dumont. In the 1910s, Cartier expanded its operations in Europe and established a branch in New York. At this time, Louis designed the Cartier Tank. Modeled after the tanks of World War I, the Tank remains one of the most iconic and influential watch designs still in production. In 1964, the Cartier family sold the business. Cartier exchanged hands numerous times in the latter half of the twentieth century before finally settling in Richemont’s possession.

Cartier watches are known all over the world to be one of the most valuable, reputable, most desired, and treasured luxury brands in the industry. Those who admire only the best timepieces are drawn to this brand and eagerly await the launch of new models. Whether it is for the fashion-conscious teen or a dignified entrepreneur, a Cartier watch is sure to entice and appeal to those with exquisite taste. Cartier provides only the best craftsmanship to each watch to ensure consumer needs and requirements are met with supreme quality. There is no doubt that Cartier watches are at par with the highest of standards set by the horological industry.

Some of the famous watch models include the Tonneau 1906, Tank 1910, and Tortue 1912. These timepieces were continuously manufactured even past the death of Louis in 1942. Subsequently, the Baignoire 1957, Panthere 1983 and the Pasha Cartier 1985 were launched. The Tank Francaise and the Privee collection were produced more recently in 1996. The timepieces became so popular that it developed a large following of women who considered the watch more of a jeweled accessory and a fashion statement.

In the 1980's the Cartier 'Panthere' was the watch to wear. The common theme has always been that Cartier is geared more for the women's market. One model that has done extremely well for Cartier men is the 'Roadster' and 'Roadster Chronograph'. Just recently, in commemoration of the 100th anniversary of the 'Santos', Cartier unveiled the 'Santos 100'. The 'Santos 100' and the 'Santos 100 XXL' continue in popularity. Newly released 'Ballon Bleu de Cartier' and 'La Dona de Cartier' are already favorites of watch aficionados.

All Cartier cases and bracelets are handcrafted with utmost care, with full attention to detail and superb craftsmanship. The Cartier wristwatch that we know today still possesses the traditions and pioneering work laid down by its founder. It is for this reason that Cartier watches exude such a highly popular and powerful image. They are considered one of the classic timepieces that would make fabulous additions to any collection. Not only are the watches known for their extraordinary quality but they are also historical and sophisticated designs that continue to be extremely popular worldwide.

* https://www.essential-watches.com/ sells only 100% Authentic Cartier watches, but is not and does not claim to be an Authorized Dealer of ANY brand advertised on our website including Cartier. Because we are not an Authorized Dealer for Cartier, we can not advertise their watches as "brand new". For all intents and purposes, the watches we sell are USED, but are in immaculate - perfect - never sold condition. We specialize in discounting only the highest-grade 100% Authentic Swiss and German timepieces. We trust these timepieces to be of such high caliber that we warranty all "unworn condition" watches for a period of 2 years unless it is sold as a used watch, and in that case, you will receive a 1 year warranty. You CAN NOT expect and WILL NOT receive the factory Cartier warranty on any watch we advertise. We are the sole warrantor of ALL Brands sold on our website.
We encourage you to call us if you have any questions. +1-310-601-7264.