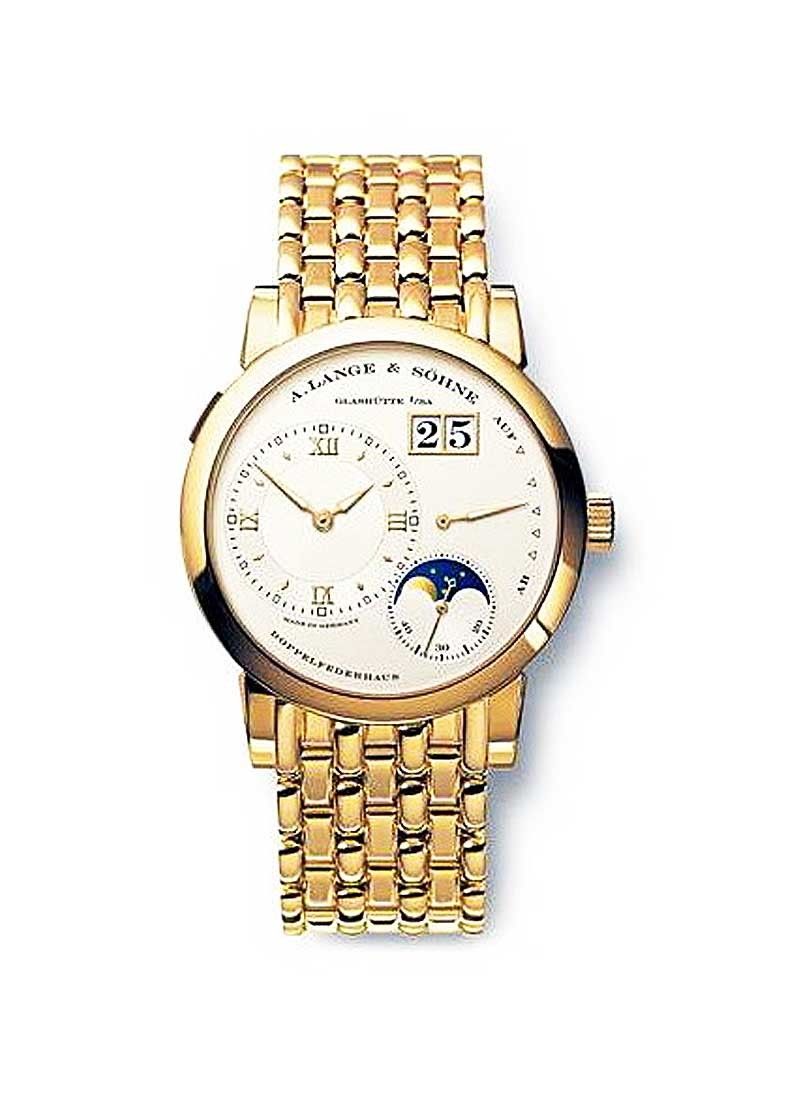 A. Lange & Sohne is a watch company established in Saxony that nearly closed down during the World War II but persevered and reached the place of honor highly admired in the world of horology. Known in the watch industry to create only a few pieces each year, A. Lange & Sohne is set in making sure that each watch carries undeniable elegance and craftsmanship and it really holds true. Its founder Ferdinand A. Lange from the very beginning only wanted to create watches of superior quality and proof of that is up until now the company continues to do so. In an attempt to replicate the orbit of the moon, A. Lange & Sohne created the Lange 1 Moonphase model wih moon phase indicator on the face of the watch showing even the waxing and waning of the moon. Aside from such feature the Lange 1 Moonphase watch also has an outsize date for clarity and better readability. It comes in an all-time favorite red gold case very popular nowadays and classic black crocodile strap carefully handstitched to perfection. The luminous hand at three o'clock indicates the power reserve. The Lange 1 Moonphase has a sapphire-crystal case back boasting of the watch's intricate manual movement and judging from the tiny machines seemingly intertwined one can appreciate all the hard work that were put in. All watches of A. Lange & Sohne were manufactured with the best engineering techniques, quality and impeccable designs, and precision in movements manifesting a more than a century and a half heritage of expertise and distinguishable characeteristics. The A. Lange & Sohne Lange 1 Moonphase may look simple at first glance but make no mistake about it since this watch is backed by years of values and guiding principles of its founder. Elegance and resilience that have stood the test of time.

* https://www.essential-watches.com/ sells only 100% Authentic A. Lange & Sohne watches, but is not and does not claim to be an Authorized Dealer of ANY brand advertised on our website including A. Lange & Sohne. Because we are not an Authorized Dealer for A. Lange & Sohne, we can not advertise their watches as "brand new". For all intents and purposes, the watches we sell are USED, but are in immaculate - perfect - never sold condition. We specialize in discounting only the highest-grade 100% Authentic Swiss and German timepieces. We trust these timepieces to be of such high caliber that we warranty all "unworn condition" watches for a period of 2 years unless it is sold as a used watch, and in that case, you will receive a 1 year warranty. You CAN NOT expect and WILL NOT receive the factory A. Lange & Sohne warranty on any watch we advertise. We are the sole warrantor of ALL Brands sold on our website.
We encourage you to call us if you have any questions. +1-310-601-7264.