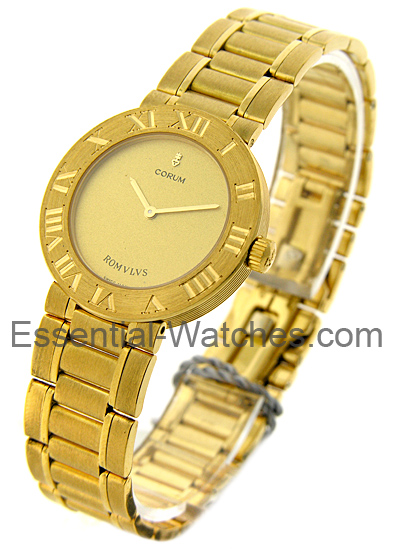 Corum Romvlvs 27mm Yellow Gold on Bracelet dimension 27mm size of the case, quartz in movements. Corum model #: 050-80356- V400 has the plain satin finished gold dial with numerals engraved into the bezel. Very shiny specially during at night because of its golden composition. Corum Romvlvs 27mm Yellow Gold model #: 050-80356- V400 which has the champagne dial, this watch shines well and reflect to the light cause all the single face on it composes of golden karat.
Corum is a Swiss watchmaker based in La Chaux-de-Fonds, Canton of Neuch?tel. Fathered in 1955, it makes high-quality and high-price watches, many of which are bordered editions and thus especially pricey. The benchmark watch series for Corum is its "Admiral's Cup" series. Corum has also been the maker of the World Series of Poker watches that accessorized World Series of Poker bracelet in 2007, and became the maker of the bracelets themselves in 2007. Corum Romvlvs 27mm Yellow Gold model #: 050-80356- V400 advantageously created and it is high demand to the market today since many watch lovers admire it.

* https://www.essential-watches.com/ sells only 100% Authentic Corum watches, but is not and does not claim to be an Authorized Dealer of ANY brand advertised on our website including Corum. Because we are not an Authorized Dealer for Corum, we can not advertise their watches as "brand new". For all intents and purposes, the watches we sell are USED, but are in immaculate - perfect - never sold condition. We specialize in discounting only the highest-grade 100% Authentic Swiss and German timepieces. We trust these timepieces to be of such high caliber that we warranty all "unworn condition" watches for a period of 2 years unless it is sold as a used watch, and in that case, you will receive a 1 year warranty. You CAN NOT expect and WILL NOT receive the factory Corum warranty on any watch we advertise. We are the sole warrantor of ALL Brands sold on our website.
We encourage you to call us if you have any questions. +1-310-601-7264.